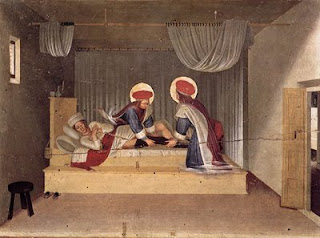 Some thoughts on Liturgical Music

Now here's a curious thing. In much of what I've read regarding the re-introduction of the meatless Friday in England and Wales, including the odd pastoral letter, the impression is given that the situation the bishops are attempting to reform- i.e. the failure on the part of large numbers of the faithful to perform any act of self-denial on Fridays- dates to 1984 or thereabouts. This is an error. The loosening of the law on Friday abstinence actually came about in around 1970. I clearly remember being in school when the change occurred. I also recall my difficulty, soon afterwards, of trying to explain to the priest in confession that I had failed to perform any (alternative) act of self-denial on the previous Friday. Within a few short years, however, I came to the view that sticking with the tradition of going without meat was the easiest way of ensuring that I did something rather than nothing. It isn't a particularly maccho penance, I grant, but, as I have long told myself, it can be added to and one of these days I may just do that. It is interesting to see that the bishops appear to have come to something like the same view. But what about circa 1984?

As I've mentioned the law on abstinence- and its application in England and Wales- changed back around 1970.
What happened in the eighties was an attempt by the bishops not wholly unlike what is happening at present. Someone seems either to have twigged that the looser interpretation of the law, brought in a decade or so earlier, had resulted in most of the faithful not performing any Friday penance at all or else had been shaken up by the publication of the new code of Canon Law. At any rate the bishops issued an instruction insisting upon the necessity of Friday penance. It was one of those documents that was bound to stick in the memory owing to a most curious- and, I felt, unsatisfactory turn of phrase. Their graces and lordships while insisting upon the duty of Friday penance said that failure to perform the chosen penance on a particular Friday was not to be seen "in the light(sic) of sin". Now, I could see the point they were making but the use of the term "light" as applied to sin seemed regrettable at least and evidence, I felt, of a collective"brain disorder". Schizophrenia, perhaps...or dementia?

Given the collective amnesia regarding the earlier instruction, the latter begins to look more likely!
Posted by Patricius at 20:35 No comments: 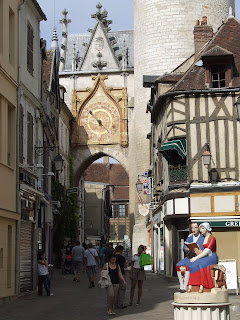 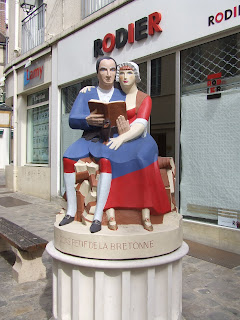 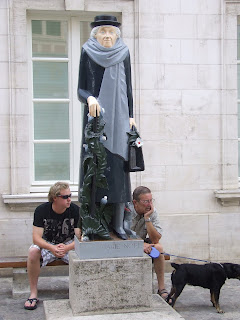 (Click to enlarge)
Some of the sights of Auxerre.
I had previously visited Auxerre in 2000 when, early on a Sunday morning, while heading south on our way to Rome, I had pulled off the autoroute and rolled into the car parking on the square in front of the cathedral with the aim of getting to mass. That I had done so with a caravan in tow now seemed hardly credible given the narrowness of streets and the busy traffic however it had been much quieter on that occasion. Indeed in spite of the proximity of the cathedral we were not to get mass there but had to seek out another church. The scarcity of masses in this once Catholic nation never ceases to surprise me! On our search, however, we encountered some of the amusing statuary of the town and on this later visit we determined to re-aquaint ourselves with one that bore a passing resemblance to Mary Poppins. It was not in fact Mary Poppins but a likeness of Marie Noel! Marie Noel is not a French Christmas greeting but, as I subsequently discovered, a former inhabitant of Auxerre who is regarded as having been the best female French poet of the twentieth century. Not being used to classifying poets according to their sex, it is a concept I have struggled with. One wonders if it is code for "she wasn't really any good at all"- or, "She was o.k. for a woman," with the unspoken implication that as everyone knows women just don't cut the custard when it comes to real poetry. On the other hand it may be just the French obsession with sex. This was a source of puzzlement to me when I was at school. Why, I wondered, must all French nouns be either masculine or feminine? Why can't they just leave off thinking about sex for long enough for a table to be neuter?
Posted by Patricius at 00:22 2 comments: 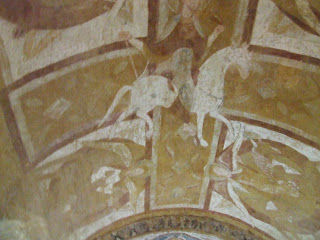 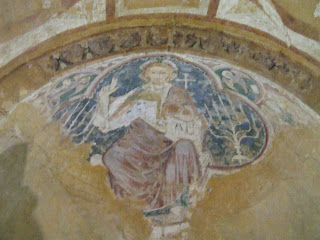 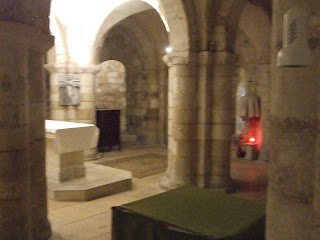 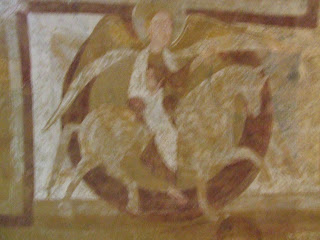 (Click to enlarge) Auxerre Cathedral Crypt and details of frescoes. Surviving imagery includes several illustrations from the Apocalypse.
Posted by Patricius at 23:42 No comments: