The Most Sacred Heart of Jesus

Posted by Patricius at 21:15 No comments:

Thanks to Fr. John Boyle of Caritas in Veritate
Posted by Patricius at 09:08 No comments:

Thanks to Mulier Fortis - and everyone else!
Posted by Patricius at 17:06 No comments:

Back Church in Pakistan

Please sign Aid to the Church in Need petition to protect Pakistan's Christians here.
Posted by Patricius at 00:53 No comments: 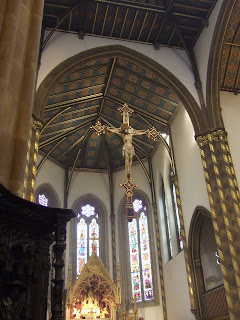 Posted by Patricius at 09:01 No comments:

I watched the programme about the Rosminian priests abuse scandal on BBC 1 last night. The accounts were both harrowing and ghastly, although I feel the programme makers dealt with the whole business sensitively. I do not think that this was a BBC hatchet job. It did not need to be. The victims now men just a few years older than myself came across as very plausible witnesses and I was appalled at both the descriptions of the abuse and the plight of what were then young boys away from home without anyone to whom they could turn. I was struck forcibly by a couple of leading thoughts.

The first concerned the abusing priests and the question that occurred to me was: how on earth did they come to perform these appalling acts? I find it difficult to imagine that they came from nowhere. Was it not more likely that they had arisen in some sort of culture in which such acts were both practised and accepted?

The second thought involved the reaslisation that these cases of clergy abuse took place within boarding schools. In contrast it appears as if there is an almost complete lack of such abuse cases within what might be called an ordinary or normal parish situation. I may be wrong but there seems to be a fairly clear "institutional/residential" bias.

And then there are these unfortunate victims. The cases described in the programme occurred at "Prep" Schools to which children as young as seven were sent to board. I do not excuse the abusers one bit, but I have to ask what kind of parents send their children away like that? Such parents appear to exhibit a remarkable detachment from their children's welfare- a striking- even alarming- lack of natural affection. Indeed, might not the emotional detachment of parents with respect to their children be precisely the kind of seed bed that originally nourished a culture in which the abusers matured? 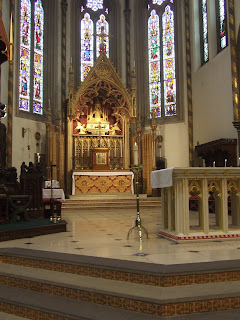 A view of the sanctuary of the Metropolitan Cathedral and Basilica of Saint Chad at Birmingham. On Sunday, being free of my usual responsibilities, we headed into the West Midlands and got to Birmingham in time for the Mass at 11 a.m.. St. Chad's, the first cathedral to be erected in England following the Reformation, was designed by the famed gothic revival archtect and ideologue Augustus Welby Northmore Pugin(1812-52) and was consecrated in 1841. Constructed largely in brick with stone features it has a light airy interior with somehat high spindly columns being inspired, it is said, by north German models. Above the original high altar is a reliquary containing bones of St Chad, the seventh century bishop of the Mercians, which, originally enshrined in Lichfield Cathedral, were rescued at the Reformation.
Posted by Patricius at 23:59 No comments:

Praise to the holiest!

"Praise to the holiest in the height" features as the hymn of the angels in Blessed John Henry Newman's "Dream of Gerontius" which was famously set to music by Elgar. Here it is sung as I first encountered it in the old "Westminster Hymnal" set to the tune "Billing" by Sir Richard Terry.
Posted by Patricius at 00:01 2 comments:

Posted by Patricius at 23:43 No comments:

The Sequence "Veni Sancte Spiritus" has, in my opinion, one of the most beautiful tunes ever written down. The text is attributed to Cardinal Stephen Langton - the thiteenth century Archbishop of Canterbury who famously appears on the Magna Carta. Some have also ascribed the tune to him but, whatever the case, there is certainly a "fit" between words and music.

Before the reform of the liturgy the sequence was said or sung throughout the Octave of Pentecost. One year the choir to which I belonged (in my youth) had the special treat of singing it on three occasions for, in addition to the solemn mass of the Sunday, we had two further high masses for the beginning and ending of the Forty Hours devotion within the octave and for which the mass of the octave took precedence. Happy days!
Posted by Patricius at 10:58 No comments:

Posted by Patricius at 22:50 No comments:

With thanks to The Path Less Taken.
Posted by Patricius at 23:53 No comments:

Eleven years ago - that is on the 1st June in the year of the Great Jubilee, having begun our return journey from Rome and, having paused with our caravan near the shores of Lake Trasimeno on the borders of Tuscany and Umbria, it being, by our reckoning, AscensionThursday, a holy day of obligation in England and Wales in those days, we decided to aim to get to mass in the Church of San Francesco in Arezzo. This was one of my typically cunning plans since it meant that as well as getting to mass we would be able to see the celebrated fresco cycle of The Legend of the True Cross by Piero della Francesca- for a second time! Much to our surprise upon arrival, San Francesco seemed remakably quiet.

Eventually we found mass being celebrated- not at the high altar but in the chapter house - by a priest in red vestments. Clearly what was being celebrated was not the solemnity of the Ascension of the Lord but the feast, or memorial, of Saint Justin the martyr. This was the first time I experienced the Ascension being transferred to the following Sunday. I didn't like it then and I didn't like it later when our bishops in England and Wales took the same course. I'm not keen on the transference of other feast days like the Epiphany but the effective dropping of Ascension Thursday I like least of all because it disregards the Novena of the Holy Spirit. In all fairness to our English and Welsh bishops, it has to be said that they were far from being the first to jump on this particular bandwagon. That said, I hope that they will be among the first to jump off it.

Update:
In case anyone should get the wrong idea: I'm for jumping too!