I had my last cigar nearly six years ago. Now I fear I may have given up a practical aid to sanctity - at least if the reports on St Joseph of Cupertino are to be believed!

Saints who smoked, popes who puffed, and others who snuffed.
Posted by Patricius at 23:36 No comments:

Thanks to Countercultural Father.
This is a very powerful video the main arguments of which seem, to me at least, unanswerable.

I have never described myself as "Pro-Life". The term seems somewhat woolly to me. Anti-abortion, anti-euthanasia and anti-the-culture-of-death are sharper and more accurate terms. Wars are won by people fighting against something. They also call for courage, strategy and resources.

There is certainly much to reflect upon here.
Posted by Patricius at 00:41 No comments:

What the BBC aren't telling you!

Just check this out!


Thousands of people rallied in Paris and across France on Saturday to protest a government bill that would extend marriage and adoption rights to same-sex couples. March organisers said marriage required "one dad and one mom for every child."

By Charlotte BOITIAUX / Joseph BAMAT
Opponents of a bill that would open up civil marriages and adoption to same-sex couples in France marched in the country’s main cities on Saturday to protest what they call a “major and dangerous upheaval”.
Protesters took to the streets of Rennes, Nantes, Dijon, Bordeaux, Lyon, Marseille and Toulouse to participate in the so-called “Demonstration for All” rally organized by conservative Catholic groups and which counted on the support of right-wing parties.
Their stated goal was to persuade French lawmakers to abandon plans to pass the new law called "Marriage and Adoption for All"which is being championed by France's ruling Socialist Party.
In Paris thousands of people gathered in the Denfert-Rochereau square, many brandishing signs that read “one mom and one dad for one child”. The crowds largely respected requests by organisers to wear blue, white and pink clothes and abstain from brandishing the names or colours of their own organizations or political parties.
Organisers said there was between 15,000 and 20,000 people at the protest in the French capital.

The best hats in English history! 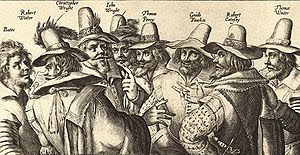 Posted by Patricius at 17:41 No comments:

On a flying visit to Boulogne sur Mer back in September I explored the Cathedral. I saw someone I recognised but did not expect to see. "I am sure that is Our Lady of Walsingham", I said. I looked closer and...sure enough, it was 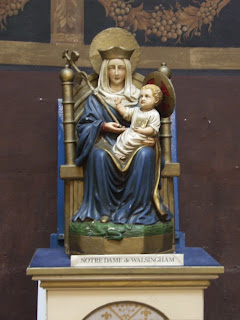 Notre Dame de Walsingham!
Posted by Patricius at 15:39 No comments: