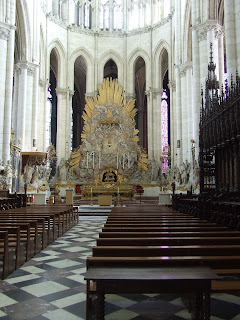 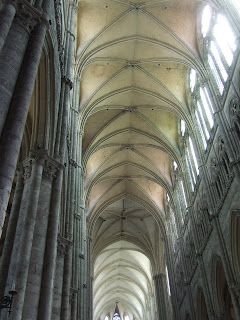 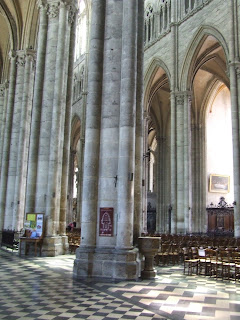 (Click to enlarge) Three views of the interior of Amiens Cathedral.

The great height of the interior might give one the impression that the builders started to build upwards, kept on going and only reluctantly stopped their upward progress in order to build the vaulting. What must it have been like! For a few hundred years now- certainly since the Renaissance - we have had professional architects who have drawn up plans and elevations on paper before work was begun. The builders of these great edifices were no less professional but did things differently. For a start, they did not have paper and I suspect that this had a marked effect upon the design and the very appearance of the building. It is surely significant, for instance that, while the semi-circular arches of the earlier Romanesque style rose upon simple circular "drum" columns or piers, following the emergence of rib vaulting the columns or piers develop a (characteristically gothic) clustered form. While aesthetically this clustered form contributes to and enhances the appearance of height it seems also to have been a practical means of preparing for the lines of the ribs of the vault above. In short, the medieval builders were "drawing in space".
Posted by Patricius at 22:46 2 comments: 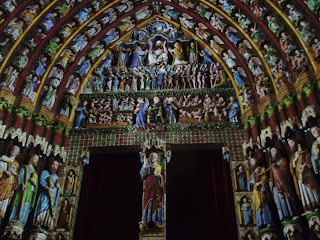 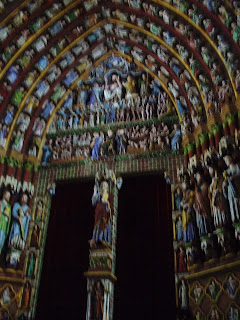 I took the two photographs above during the son et lumiere show which is given during the summer months after nightfall. Traces of the original polychromy were found during restoration a few years ago and the information used to make a reconstruction using light projection. Neither my photographs- nor any others I have seen- really do justice to the experience.

It has long seemed to me that the column figures flanking the doorways of the French Gothic cathedrals serve as a vivid illustration of the Church as God's temple "built of living stones". As I stood before the west front of Amiens Cathedral on the night of 5th July and the lights came on I, along with many in the crowd, gasped in wonder as this building of seeming living beings sprang into life! I realise I have put that somewhat awkwardly but that is how it was. The whole company of Heaven had come to earth and the living stones not only breathed and spoke but sang!
Posted by Patricius at 22:30 3 comments: 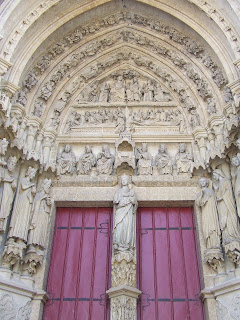 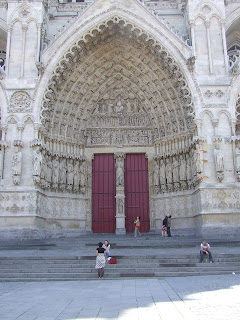 (Click to enlarge) Two of the west portals of the Cathedral of Our Lady at Amiens.

Much has been made of the technical developments which are seen as characteristically "Gothic"- the pointed arch, the flying buttress, rib vaulting and so forth. The ambition and spirited competitveness which drove the cathedral builders to build ever higher- Amiens Cathedral, incidentally, is the highest complete cathedral in France- are frequently remarked upon with some wry asides at the apparent vainglory. My own impression, however, in looking at these churches, is of a powerful earnestness- a sense of an over-riding concern to make the very building and its mute stones speak.

The top image which shows the tympanum and archivolts of the south doorway of the west front honours Our Lady, as befits a church dedicated to her. Holding the ChristChild her figure is shown in front of the doorway while column figures depicting the Annunciation and Visitation stand to her left (our right). On the lintel above are shown prophetic figures from the Old Testament, while above to the left we see the death or Dormition of the Virgin while to the right the angels have descended to her tomb in order to assume her body into Heaven.

In the lower photograph can be seen the central doorway where the theme is the Last Judgement. The figure of Christ is central here and the column figures represent the twelve apostles. Dominating the tympanum we see Christ sitting in judgement and displaying His wounds while to His left and right Our Lady and St John intercede for humanity while angels hold up the instruments of the Passion. Underneath we see the dead rising from their graves as the four angels sound their trumpets. Lower still, St Michael is shown weighing souls in the balance.
Posted by Patricius at 22:39 No comments: 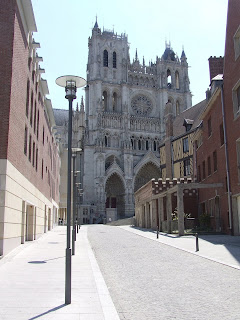 I spent the best part of the first couple of weeks of this month towing a caravan around and visiting some of the sights of the Ile de France. It was a loosely planned trip following a roughly circular route taking in Amiens, Laon, Rheims, Troyes and Auxerre before a brief brush with the Paris Boulevard Peripherique and the coast at the junction of Normandy and Picardy. I was thus able to fulfil a part of a longstanding ambition of visiting the bulk of the great gothic cathedrals of that region the origins of which go back to my very first visit to France in the summer of 1973 when I first fell under the spell of the great cathedral of Chartres.

From an architectural point of view, Chartres Cathedral is part of that great burgeoning of church building in the area around the Ile de France which saw the birth and early development of the gothic style during the twelfth and early thirteenth centuries. It is an outstandingly beautiful building from many points of view and I was certainly moved by this visual elegance but what fascinated and captivated me most of all was the fact that it had retained by far the greater part of its iconography in stone sculpture and stained glass. I was also fortunate in having been able to attend an introductory talk given by the English language guide, Malcolm Miller, which was both clear and orthodox. From that day on I was smitten and have returned repeatedly over the years. This year I determined to look at the broader context as it were and so it was that in the warmth of a summer noon I approached the Cathedral of Our Lady at Amiens.
(To be continued)
Posted by Patricius at 23:53 No comments:

Posted by Patricius at 00:42 No comments: