"As with other venues, the overwhelming impression at Salford Cathedral is people: thousands of them! Not only was it crowded for Mass with even standing room at a premium, the crowd continued along the road outside and around the corner, at least 1,000 of them speaking quietly and happily during their lengthy wait.

“I can’t believe that so many people have come”, remarked one of the priests based at the Cathedral.

“St Therese has given Catholics an excuse to come together and say to the world, ‘I’m a Catholic!’ She has been a catalyst for people to declare their faith publicly."

From the Saint Therese relics blog

Posted by Patricius at 13:52 No comments:

...from a remote corner of Catholic England.

Grace of the presence of the relics from Catholic Church (England/Wales) on Vimeo.

Posted by Patricius at 22:32 No comments: 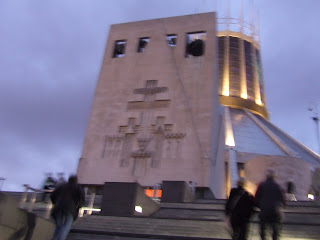 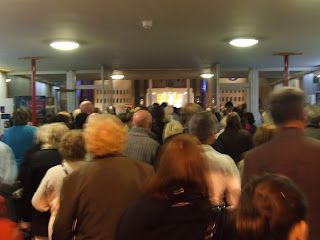 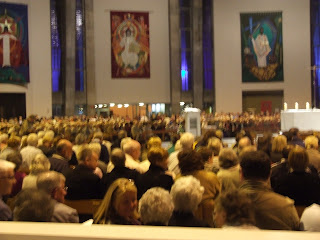 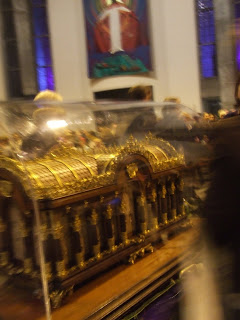 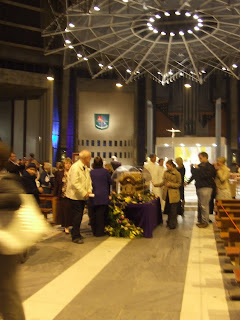 Yesterday evening it was my great privilege to be present at the mass in honour of Our Lady of Walsingham in the Metropolitan Cathedral of Liverpool in the presence of the relics of St Therese celebrated by Archbishop Patrick Kelly with bishops and priests from as far afield as the dioceses of Shrewsbury and Wrexham. Upon arrival it looked as if we would not get in. The crowd in the narthex was almost solid. Word came that there was no more room and we were asked to move outside. With a great many others we did so but waited a couple of minutes. As the crowd thinned we saw the doors within opened and people start to move inside. At the stewards' invitation we followed spreading out around the "back" of the cathedral. Having turned right we kept going until we arrived in front of the St Joseph chapel where Archbishop Warlock is buried. (At my inquiry a very kind steward gave me his copy of the mass booklet- God bless him!) I heard afterwards that many hundreds did not get in and stood outside. We ourselves stood throughout but were granted a clear view.

Mass began with the plainsong Introit Rorate Caeli and the hymn Holy Light on Earth's horizon to "Blaenwern" and we sang the de Angelis Gloria, Sanctus and Agnus Dei as well as Credo III. The choir sang French Motets at the Offertory and Communion and we sang See us, Lord, about thine altar to the tune "Drakes Broughton" by Elgar. (Musicians take note: that is the correct spelling!) The Archbishop's sermon had a strongly literary flavour being peppered with allusive references "the holiest in the height"- a Newman reference I got and a "kindly light" my son got but I missed- probably because I was puzzling over something he said earlier. Anyway, it sounded most impressive and I hope he publishes it because I got a bit lost two thirds through. Nevertheless, let it resound to his grace's everlasting credit: he sang the Eucharistic Prayer throughout!

At the end of Mass those who had already venerated the relics were asked not to linger on account of the needs of those waiting outside but for some time things were a bit confused. No one seemed to have considered how to deal with the large number of us still in the cathedral who had not yet had the opportunity. To be fair to all concerned, I don't think that either the hierarchy or clergy of England and Wales had expected the tremendous response that the visit has occasioned. Yesterday I listened to a brief talk on a website by one bishop who seemed completely bemused- as if (and this is just my own personal opinion) there was a faith "out there" in the country that he hardly recognised! I felt I wanted to say something like "Yes, your lordship, we, the little people, are still here.!"

Much of what I have described here seems to me to be part of the Pope Benedict Effect: a reminder that it is OK to be a Catholic in the Catholic Church- whether it is the Gregorian chant of the introit or the presence of St Therese's relics in our land, or the crowds of the faithful arriving unheralded. It is good, Lord, to be here!

And, as one who has visited Lisieux on many occasions and seen the Carmel, the Basilica and Les Buissonets, it seemed to me that I was specially favoured to be squeezed in at the last moment.
St Therese pray for us!

Posted by Patricius at 08:51 No comments:

No one suspects the Spanish...

Posted by Patricius at 15:03 No comments:

I have had an eventful few weeks resulting in my spending less time in the blogosphere than usual and of which a high point was a visit to Barcelona. The trip was not my idea. Barcelona did not strike me as a place of more than superficial cultural or historic significance but the idea was of a brief family holiday when we could all be together before the young lady goes off to college and our life changes for ever. Up until this it could be said that our family summer holidays had become somewhat repetitive even to the extent of being formulaic. I for one, however, see little case for changing a winning recipe. Having, arguably, settled into something of a rut with the caravanning holidays in France, there was something to be said for a change. In the event there was to be somewhat more novelty and excitement than I might have imagined. There were both good and less than satisfactory experiences.

To begin with, there was sunshine and warmth- the former being a change from my experience of most of the summer here this year- and a very pleasant hotel room with a balcony from which we had a view of some of the spires of the Sagrada Familia church. On the first evening, however, while descending an escalator I was the victim of pickpockets who made off with my wallet containing two credit cards and a small amount of cash. As I neared the bottom of the escalator the man in front of me dropped something with a clatter and crouched down to pick it up. I found myself in a panic struggling to avoid falling over him and being pushed over by the crush of people who came against my back. Somehow I managed to stay upright and, having got off the escalator saw the man who had caused the kerfuffle looking intently at a mobile phone which I presumed to be the dropped item. Marvelling at the man’s apparent witlessness, I exclaimed to my son, who had been somewhat ahead, “Did you see that?” My description of events prompted his suggestion I check for my wallet and, consequently, the discovery of its loss.

Until that moment I had conceived of pickpockets as individuals operating alone. Here, however, I deduced that at least three people were involved- the man who had caused the distraction had been accompanied by a woman who had blocked the free side of the escalator and, additionally, there was the person who actually lifted the wallet. It was a discomforting thought that I had been picked off, as it were, like the animal separated from the herd and set upon by predators as one occasionally sees in wildlife programmes. It was not a pleasant start to the visit and meant that in travelling around we were constantly on the watch for anything suspicious. Nevertheless, in spite of both this and earlier misgivings, we were able to enjoy some interesting sights- and insights, some of which I hope to share in future posts.

Posted by Patricius at 14:59 No comments:

...and will be posting shortly!
Posted by Patricius at 10:12 No comments: 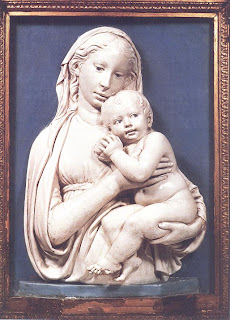 Posted by Patricius at 01:02 No comments: